Happy Veterans Day to all those who have served!

This week, as you would expect, was dominated by news of the election. The results have had an unclear, yet far-reaching effect on the healthcare industry. The following articles do the best job explaining what the potential healthcare and health IT side-effects are as a result of Tuesday’s election. A warning: many experts have a relatively negative outlook about this subject, though there are a few positive caveats in some of these articles.

To kick things off, here is Healthcare IT News‘ look at the President-elect’s health reform plan, in his own words. If you were curious about exact details of Donald Trump’s new plan, this should add some clarity.

What C-Level experts think is going to happen post-inauguration

Another in-depth look from Healthcare IT News surveys C-suite executives about their thoughts on the future of healthcare in a Trump presidency. Tom Sullivan collects and explains the information he is given from these survey responses in an attempt to lay out a few possible outcomes of new or reformed policies. Sullivan also conducted another survey, which he says indicates a “dystopian view of [a] Trump presidency’s impact on healthcare.”

Lastly, Mr. HIStalk at HIStalk: Healthcare IT News & Opinion, penned an article which posits that one thing we learned from the election is to be “Healthily Skeptical of Analytics.” As you probably know, a majority (but not all) of the pre-election data tended to indicate a landslide victory for Hillary Clinton, which, of course, was incorrect. Much of this can be attributed to the unpredictable nature of elections and flawed data, but it does draw questions about the accuracy of data in other realms (including the health IT industry).

Moving on from election news to Virtelligence news. We’ve got a few things we’d like to share with you this week.

We’ll be attending the HIMSS NorCal Annual CxO Summit in Santa Clara, California next week. The conference promises to be full of insightful information and valuable networking opportunities, and we can’t wait to be a part of it. If you’re going to be there, let us know! We’d love to spend a few minutes chatting with you.

If you’re not going to be at the summit, but are interested in learning more about how we can help you with your current or upcoming IT initiatives, do not hesitate to reach out. We’ll be in the Bay Area all weekend, and we’d love to swing by your neighborhood to meet for a few minutes at your office or over a cup of coffee. Contact us directly here.

On Monday, we posted our Weekly Jobs Spotlight which highlights the open positions here at Virtelligence. This week we’ve got a bevy of opportunities for you, but we’re particularly honed in on our Epic Radiant, Systems Analyst, an a Desktop Support Technician positions. If one of these jobs sounds like something you’d be interested in, you can apply with us in seconds. Even if none of these are up your alley, you can easily send us your information we can begin searching for a position that’s perfect for you. Apply or inquire here. 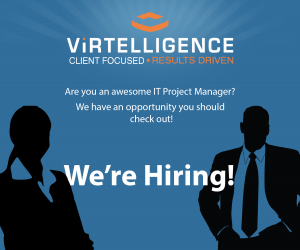 This week might have been stressful, so here’s something that’s bound to add a bit of levity

There’s not much to say about this video, except that wordplay is fun and so is Jon Bon Jovi (note: I do wish it was Jon singing in this video instead. Be sure your speakers are turned down as low as they go – actually, it might be better if you don’t have the sound on at all).

That’s it for this installment of our Weekly Round-Up. If you like what you read, be sure to subscribe for future updates. Our Round-Up will feature the articles which we found most relevant or interesting, our original blog posts, and a spotlight of our open consulting positions. It’s everything you need, all in one place!

Have a great weekend!